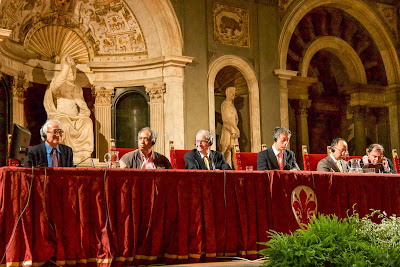 (Some of the speakers at the ARTOI meeting; the author is in the middle, between Bharat Aggarwal, PhD, Professor Emeritus, M.D. Anderson and Gary Deng, MD, of Memorial Sloan-Kettering Cancer Center.)

This is a belated report on an important cancer meeting that I attended this fall. It was the Eighth International Conference of ARTOI, the Research and Therapy Association for Integrative Oncology of Italy. This was in many ways an amazing conference, which lasted for three event-filled days.

I spoke at the first ARTOI meeting held in Rome in 2008. At that time, we had about 20 attendees, who as I remember, drifted in and out of a classroom in a Roman hospital. But my involvement with the inception of this conference goes back even further. The founding director of ARTOI is my friend and colleague, Massimo (Max) Bonucci, MD, a medical oncologist and pathologist in Rome. Decades ago, we first met at the German Oncology Society (DGO) meeting in Baden-Baden and shared our interest in non-conventional treatments, particularly that of the DGO founder, Hans Nieper, MD. Max Bonucci proposed the formation of a similar society in Italy. It seemed like a far-fetched idea, as there was no organized movement towards complementary and alternative medicine (CAM) for cancer on the Italian peninsula.

On my first tour of Italian CAM clinics, I found only a few isolated individuals, such as Paolo Lissoni at the state hospital in Monza, and Giancarlo Pizza at the University of Bologna, trying to further this cause, but absolutely no concerted effort. However, in the intervening years an astonishing thing happened. ARTOI has grown large and influential, more so than I could ever have imagined. This time there were over 300 participants, mostly from Tuscany (the home province of Florence) but also from all over Italy and from other countries as well.

This time the conference was co-sponsored by Azienda USL Toscano Centro, a giant healthcare organization with 11 hospitals in Tuscany alone, in collaboration with the Cancer Institute of Tuscany “as an opportunity to foster the exchange of knowledge and to promote the integration of care.”

The conference proper began on Friday, November 11, with an international panel in the Salone dei Cinquecento of the Palazzo Vecchio. Yes, THE Palazzo Vecchio, the ancient City Hall of Florence, whose construction began in 1299! The Cinquecento Room is the most glorious room in the palace. It was built to house the Grand Council of the Republic, which consisting of 500 members, cinquecento in Italian. The monumental paintings that line the walls are by Michaelangelo’s friend and disciple, Giorgio Vasari. I have spoken in some beautiful conference halls around the world, but nothing like this! 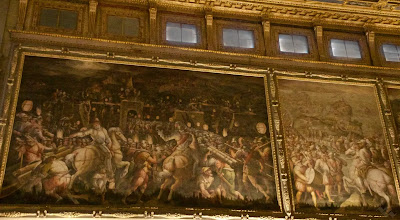 In addition to Dr. Bonucci, and many of the political and medical luminaries of Florence, my fellow panelists that evening were as follows:

This was an amazing line up of speakers, representing leaders of the CAM cancer field from Europe, America, the Near East (Israel) and China.

Where other than in the historical country of Italy can one hold a meeting in a 700-year-old building, in a palatial room that is itself one of the wonders of the world? On the next few days, the general meeting was held in the Istituto degli Innocenti, another world famous building–a child welfare association that has worked uninterruptedly for over six centuries. 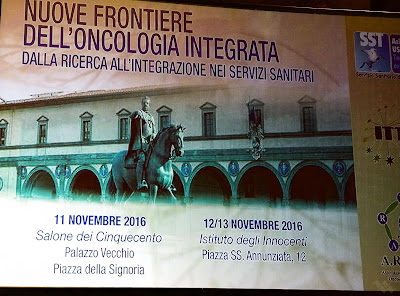 The conference line-up here was no less significant, with presentations on almost every imaginable aspect of CAM and cancer care. The whole conference was one of the most stimulating I have attended. I don’t have room here to go into all the presentations made. But readers can get some idea of the scope of the conference by looking at the agenda:

I am amazed at what my friend Max and his wife and coworker Federica Bonucci have accomplished in a few short years. They and their many coworkers have not only put Italy “on the map” when it comes to CAM and cancer, but have set an example to leaders in other countries on how to skillfully build a popular movement from the ground up through perseverance and dedication to principles.

I&#8217;m Now an Honorary Member of ARTOI
HISTORY OF IMMUNE CHECKPOINT INHIBITION
Article about me from the Northern Mariana Islands!
I&#8217;M FEATURED IN AN ARTICLE IN ARAB NEWS