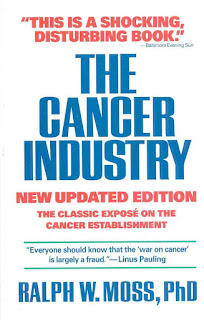 In 1980, I published my first book, The Cancer Industry. It went through many editions and led to my appearance on “60 Minutes,” among many other TV and radio shows. Thirty-five years ago it was a radical thesis that “Big Pharma” was milking the cancer field for super profits, and was actually retarding progress in many cases by making potentially useful treatments conform to their need for super-profits. I think recent events (such as the gross overpricing of new cancer drugs) have amply vindicated my point of view.

There are several components to the question of “Big Pharma’s” impact on cancer. I will briefly address (a) how much cancer costs society and (b) how much is spent specifically on cancer drugs.

In the US today, cancer is said to inflict an economic cost of around $895 billion annually. This is more than heart disease ($753 billion) and far more than #3 traffic accidents and #4 diabetes (each of which costs society around $204 billion). Cancer is also a major source of lost life and productivity and of course an incalculable “cost” in misery, heartache and loss. In 2008, Americans lost 83 million years of healthy life because of cancer, according to the American Institute of Cancer Research (AICR). New cancer drugs now typically cost $10,000 per month per patient, or around $120,000 per year per patient. Depending on one’s insurance, or lack thereof, one can wind up paying individually for much of this cost.
In 2015 the worldwide market for cancer drugs topped $100 billion in sales, according to the IMS Institute for Healthcare Informatics. IHI further states that this figure could reach $147 billion by year the 2018.
Needless to say, it is the consumer (and/or taxpayer) who bears the brunt of these unacceptable expenses. The US pays far more for prescription drugs than other countries because the government is forbidden from fully negotiating the lowest price with the drug companies, as is done in other countries. I believe this can be traced back to the lobbying efforts of “Big Pharma,” including the “revolving door” between the the drug company and government agencies.
Who are the main players behind the rise in the cost of cancer care?
The cancer marketplace functions because of the simultaneous input of many players: patients (of course!), physicians (especially oncologists), politicians seeking approval for endorsing popular “war on cancer” positions, wealthy fund-raising charities, research scientists, and regulators (such as the Food and Drug Administration). However, I would argue that the principal players are the largest multi-national pharmaceutical companies—so-called “Big Pharma.” These include Pfizer, Bristol-Myers Squibb, Roche, etc. While regulators may try to rein in the costs, according to the well-known Web site www.fiercepharma.com, “drugmakers won’t be deterred by pressure from payers, doctors, or anyone else. The payoff is too promising for that. And when a market approaches $100 billion, even 5% growth is worth billions.”
See also:
LETTER IN SCIENCE TRANSLATIONAL MEDICINE
Anti-Cancer Plan on a Tight Budget